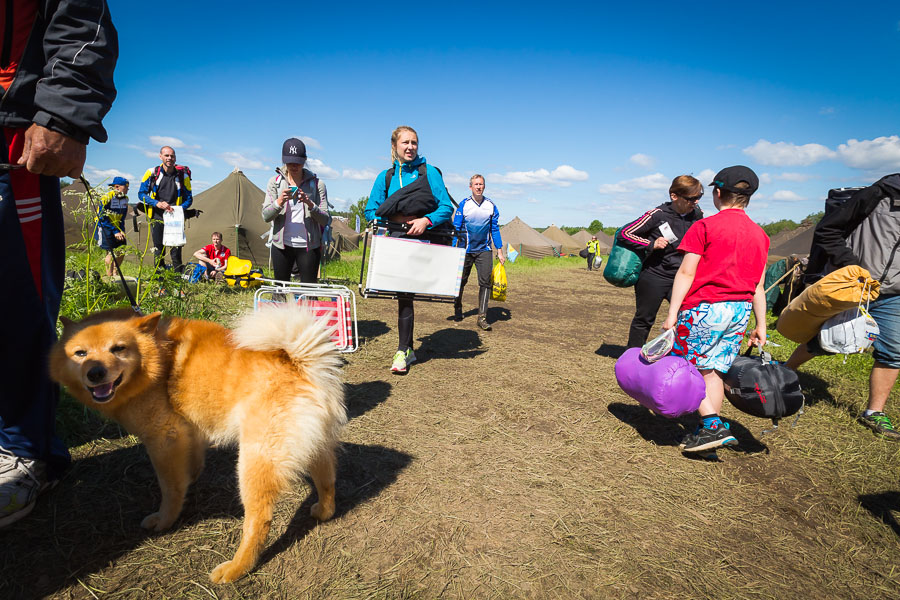 The tent village and competition centre start to empty.

A colourful stream of backpacks, rucksacks, bags and boxes heads from the competition centre to the car parks and bus stops. The tent village is emptying, leaving trodden down fields, bags of washing to take home, happy memories – but no rubbish.

Competition manager Jouko Kaihu feels satisfied. The organization has received thanks for many things, including the women’s sauna during the Jukola relay.

– More than 10 000 people had a sauna during the weekend, which was more than had been expected, says Kaihua. – Even so, we didn’t run out of wood to burn.

-A way of saving energy which could be used at home, remarks Kaihua.

In order to be successful, the Jukola relay needed an enormous amount of volunteers, competitors from around the world, understanding landowners and enthusiastic supporters.

– Without over 1800 volunteers, this whole event couldn’t have worked. Huge thanks to them as well as the landowners, says Kaihua. – Even though the weather forecast at the start of the week didn’t look good, only a few teams stayed away. This shows how much people want to take part in the Venla and Jukola relays, no matter what the weather is like.

In spite of the weather forecast and Friday morning’s showers, crowds of spectators still flocked to follow the relay.

– It was quite a sight to see the crowds at the start, comments Kaihua. – The Hornet flyby made the start even more impressive.

– It was an honour that the President of Finland and his wife wanted to visit Jukola, take a tour of the competition centre, as well as follow the competition in the forest and at the finish line.

The work of the Kuopio-Jukola organisers, however, has not finished yet. The dismantling of the competition centre starts today, Sunday, and the first lorries will leave for Paimio and the 2015 Louna-Jukola at the start of next week.